The football hard man. A proper bastard. Sly, no-nonsense, a nightmare to play against. You know the type. They’re a dying breed. Plenty knocking about in Sunday League mind, but in the top flights of English football, they’re nonexistent nowadays. That’s not always been the case, though. Some proper bruisers have graced the Premier League over the years, below are ten of the hardest players in Premier League history.

When you think Premier League hard men Roy Keane instantly comes to mind. He was absolutely solid. Flying into tackles. Sticking a foot in. He never backed down. Whether it be that crude challenge on Alf-Inge Haaland or the famous tunnel bust-up with a certain Patrick Vieira, Keane was never far from controversy and was always in the thick of it. He was a proper captain. A proper leader who always protected and backed up his United teammates. His hard man persona remains today in the Sky Sports studio. Stern.

Remember when Vinnie Jones grabbed Paul Gascoigne by the you know what? Of course you do. Iconic. Leader of Wimbledon’s notorious Crazy Gang, Vinnie bossed the midfield with an iron first. Bullying and dominating opponents from the first whistle to the last. If he made it through the full 90, that is. He holds the record for the fastest ever yellow card shown in Premier League history. 3 seconds. That’s all it took for him to go in the book against Manchester City in 1992. Good effort.

Everybody, and I mean everybody, was scared of Julian Dicks. Even Vinnie Jones. Which says it all. Dicks was a no-nonsense defender, built like a brick shithouse. He’d two-foot his Nan for the last Custard Cream if he had to. You know the type. Ruthless. Wingers had a torrid time lining up against the former West Ham and Liverpool hard man who also made a name for himself banging in penalties for fun. His technique was simple, but effective. Left foot. Thwack. When he hit ‘em, they stayed hit. The way you’d expect all hard, angry footballers to strike a ball. Pure power.

They say it’s the quiet ones you’ve got to watch out for, and that was definitely the case with David Batty. Hard as nails. Born and bred Leeds lad. Batty was a midfield general winning the Premier League with Blackburn Rovers in 1995. He wore his heart on his sleeve, even in training where he once broke Keith Curle’s jaw and refused to apologise. Ruthless. Nobody was safe.

Looks can be deceiving, but not when Jaap Stam’s concerned. Standing 6’3 tall, bald headed with a piercing stare, Stam backed up his hard man exterior with no-nonsense defending, tough tackling and an aggressive approach. He was an absolute unit bullying Premier League strikers week in, week out. Nobody messed with Jaap Stam, the big Dutchman, other than Sir Alex. A bust up between the two led to the defender’s Old Trafford exit. I’d pay good money to see footage of the altercation. Box office.

There’s a reason Stuart Pearce was nicknamed ‘Psycho’. He once played on with a broken leg. Harry Redknapp, his gaffer at the time, asked if he wanted to be subbed. Pearce responded with “I’ll give it a go.” Give it a go, with a broken leg?! Hard bastard. He was tough in the tackle too. Feared by many. Including his own teammates. A proper warrior.

We’ve all seen the way he belted out the national anthem at Euro 96. Passion, it oozed through his veins. Different breed that lad.

Robert Huth’s far from an obvious choice for the hardest Premier League player of all time, but his inclusion here is completely justifiable. For one, he was an absolute tank. A physical specimen. Never afraid to stick his head where it hurt. And two, he could take the big hits. In 2013, during a game with Wigan for Stoke, Huth suffered a serious head injury that required 28 stitches. Instead of seeking immediate medical attention, the German Premier League winner played the rest of match with a bandage over the wound. That’s a warrior, that.

Neil ‘Razor’ Ruddock. His nickname says it all. The former Spurs, Liverpool, QPR and West Ham defender was hard as nails. In 1995 he broke Peter Beardsley’s jaw during a testimonial match. Commitment. And the following year broke both of Andy Cole’s legs. Later saying he only meant to break one, not both. Right, okay Neil.

Throughout his career, Ruddock’s fitness and physique was often questioned. To be fair, he wouldn’t look out of place if he rocked up on a Sunday morning down your local playing fields.

The toughest of them all? Gotta be Big Dunc or Duncan Disorderly. Loved a beer. Loved scrapping more. He was arrested four times and got locked up for three months after nutting someone on the pitch. 8 red cards in the Premier League. Nobody has more. Even Roy Keane backed down when confronted by the Scotsman. He was proper hard.

Diving, stricter laws and football becoming a lot softer has resulted in the football hard man slowly dying out in the modern game, which is sad, really. I’d give anything for another Keane/Vieira rivalry. 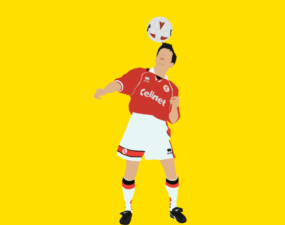 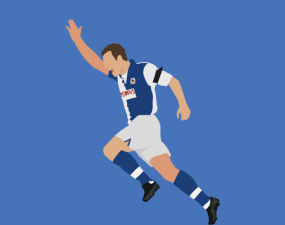 20 of the Best Players to Play for Blackburn Rovers

A founding member of the Football League, Blackburn Rovers have been crowned English champions six times and won the FA …