While in most walks of life and places of work multiculturalism is considered a virtue, in football it does not have the same prestige position. Instead, it is more often used as a stick to beat with.

Why this is the case is up or debate. Perhaps the simplest explanation is that a football club is ostensibly meant to be a representation of the area it is based. Bristol City players are meant to come from Bristol, Nottingham Forest players from Nottingham, and so on and so forth. Except this is plainly not the reality we are living in.

At almost every level of the game, almost everywhere in the world, until you reach an amateur level, footballers are hired hands. They play for the club they play for, not because of geography, but because it is a mutually beneficial relationship. Not only is the case in the modern game, but it has been this way for a very, very long time. Even in the 1800s when Association Football was taking hold in Britain, players would often relocate from one end of the country to the other in order to play for a particular team.

There are perhaps more sociological explanations as to why multiculturalism is considered a vice in the modern game. Though it is becoming less so in recent times, football is an intensely tribal game. Tribes are divided into subsections, then more subsections, then more subsections. I might not like the team from the next town over. But fans of both sides probably don’t like teams from the opposite end of the country. But fans in the country collectively don’t like fans from another country. It goes on and on.

This is perhaps one of the reasons that fans tend to dogpile a team with more foreign players. Despite it being the norm for a top-flight, or even a second-tier team to be represented by dozens of different nationalities, internationality is still considered undesirable. Twenty-two years ago, it was even more so…

Gianluca Vialli was born in Italy in 1964 and represented his country 59 times between 1985 and 1992. In 1998 he would become Chelsea’s player-manager and command the most cosmopolitan team the Premier League had ever seen.

Before this, Vialli was an accomplished player. He made his debut for hometown club Cremonese in 1980, aged just 16. He played over 100 times in the league for the Lombardy based club, scoring 23 goals before his 20th birthday in 1984. After helping the club to promotion from the third tier of Italian football, Vialli was snapped up by Sampdoria.

It was at Sampdoria that he would become a household name and become one of the most distinguished strikers in Europe. While they have since fallen off their perch, Sampdoria were once a member of Europe’s elite. With Vialli and Roberto Mancini leading the line, they won Serie A in the 1990-91 season, the Coppa Italia three times between 1985 and 1989 and the now-abolished UEFA Cup Winners’ Cup once in 1990.

Vialli then transferred to Juventus where he would stay for a further four trophy-laden years. He won the UEFA Cup in his first season with the Old Lady, a second Scudetto in 1994-95 and a fourth Coppa Italia the same season. The cherry on top of the cake came in 1996 when he was part of the team that beat Ajax on penalties to win the Champions League final.

He experienced professional football outside Italy for the first time in 1996 when he signed for Chelsea. The London club were an established top-flight club but far from the European powerhouse that they are today. Having finished in the bottom half the season before Vialli’s arrival, Chelsea finished in 6th place in 1996-97. They would improve on their league position every year Vialli was a player at the club. In addition to a creditable league campaign, Vialli’s Chelsea won the FA Cup in the same season.

The following campaign was not as bright for Chelsea. That was until manager Ruud Gullit was dismissed in February following a dreadful run of form. Faced with the notoriously difficult task of trying to find a new manager at the mid-point of the season, the Chelsea hierarchy appointed the experienced Vialli as player-manager. Under Gullit, Chelsea had already reached the penultimate stage of the League Cup and Cup Winners’ Cup, but under his stewardship, they managed to win both competitions. As well as success in the cups, Vialli guided Chelsea to a 4th place finish in the Premier League. It was enough for the Chelsea board to be persuaded from holding off their search for an alternative, more experienced boss.

In Vialli’s first full season as Chelsea manager, he led the Blues to a 3rd-place finish, their highest league finish in almost half a century. They had already established themselves as a club less than afraid to use the foreign market to sign players. In the previous campaign they signed a number of foreign talents – Gus Poyet joined on a free, Tore Andre Flo signed from Brann and Dutch international Ed de Goey joined for a fee of £2 million.

In 1998-99, Vialli took their foreign expansion a step further, bringing in Marcel Desailly, Albert Ferrer and Pierluigi Casiraghi, all on big-money deals. Spurred on by the success of his non-British players, Vialli brought in more faces from abroad in 1999-00, a move which meant it was only a matter of time until Chelsea became the first Premier League team to field an all-foreign starting 11.

Didier Deschamps came in, as did Gabriele Ambrosetti, Emerson Thome and George Weah. They also signed Englishman Chris Sutton for a club-record £10 million, but by this time the bulk of Vialli’s squad was non-British.

Vialli’s Chelsea had four English players who could claim to be first-team regulars. Defender Jon Harley made 26 appearances in total. Graeme Le Saux made 13 but would have made more had he been fit for the entirety of the season. Record signing Chris Sutton made a grand total of 39 appearances but scored just three times in a very disappointing campaign for the Premier League winner. Dennis Wise was the Brit who had the most minutes on the pitch that season; he made 50 appearances in all competitions.

There was a couple of English youth prospects, Neil Clement, Rob Wolleaston and Mark Nicholls all made a handful of appearances between them. There was also the emerging John Terry, who played nine times in what was his second season in professional football.

But a quick look at the stats for that season reveals that foreign players dominated Vialli’s line-ups. This reached a peak on Boxing Day 1999, a day which will go down in Premier League history as emblematic of the move away from the domestic and toward a more international future.

Jon Harley came on with just less than ten minutes remaining, but by this time a media storm had already formed. Chelsea ran out 2-1 victors, the Norwegian Tore Andre Flo scoring both their goals. Vialli was distinctly confused by the press’s fascination. He simply stated that he had chosen the best 11 available to him; Chris Sutton, Dennis Wise and Graeme Le Saux were all injured for the Boxing Day fixture.

While some Premier League fans could be forgiven for forgetting the names of some of the players on the pitch that day, others were mainstays of the division for many years. Gus Poyet played for both Chelsea and Spurs between 1997 and 2004 and would go on to manage Sunderland, Brighton and Leeds in England.

Didier Deschamps spent just one season in England but made over 100 appearances for the French national team and would become one of an elite number of men to have won the World Cup as both a player and a manager.

Roberto Di Matteo is another who had a profound and lasting impact on English football. He played for Chelsea for six years between 1996 and 2002 but spent many more seasons on British soil as a manager. He took over Milton Keynes Dons vacant position in 2008 before becoming West Brom manager in 2009. After his Baggies dismissal, Di Matteo took a job as assistant manager to Andre Villas-Boas at Chelsea. Following the Portuguese’s sacking, Di Matteo would take over the top job at Stamford Bridge.

Astonishingly, Di Matteo’s side triumphed in the Champions League that year, beating Barcelona in the semi-finals, then Bayern Munich in the final. A feat made all the more impressive by the fact that the decisive match took place in Bayern’s own stadium. Though he would be dismissed the following season, Di Matteo is one member of Vialli’s 1999 side whose significance went well beyond that fateful Boxing Day.

Dan Petrescu was another who spent a great deal of time in the United Kingdom. He played for Sheffield Wednesday before signing for Chelsea in ’95. After his time at Stanford Bridge was over, he stayed in the Premier League with Bradford City and then Southampton.

Tore Andre Flo was of similar stature in Britain. After leaving Chelsea, Flo had stints with Rangers, Sunderland, Leeds and MK Dons before retiring in 2012.

Though they might not have known it at the time, this group of players were trailblazers in the most emphatic sense of the word. The football hard man. A proper bastard. Sly, no-nonsense, a nightmare to play against. You know the type. They’re a … 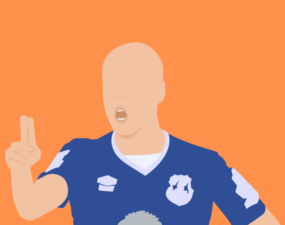 Scoring a hat-trick is the ultimate signifier of greatness in football. You can get lucky and score one goal. Even …