The United States was riding high coming into the 2010 World Cup. As winners of the 2007 CONCACAF Gold Cup, the Americans earned themselves a berth in the 2009 Confederations Cup in South Africa.

During that tournament, they beat reigning European champions Spain en route to a second-place finish in the tournament after a 3-2 loss to Brazil in the Confederations Cup final.

Not only did the United States have a good Confederations Cup run in 2009, but the team was rolling through their World Cup qualifiers under new coach Bob Bradley who replaced Bruce Arena after the debacle of the 2006 World Cup. The United States finished in first place in CONCACAF World Cup Qualifying, ahead of bitter rivals Mexico.

They needed a bounce-back tournament after the disappointment of the previous World Cup. In 2006, the United States was ranked 5th in the world heading into the tournament in Germany. Instead of building on their 2002 quarterfinal run, the 2006 team crashed out in the group stages after defeats to the Czech Republic and Ghana and a draw with Italy. The Yanks scored just 1 goal in their three matches.

This time around expectations were lower. Despite their strong showing at the Confederations Cup and throughout qualification, the United States was ranked 22nd in the FIFA World Rankings. They were drawn into a group with England, Slovenia, and Algeria.

There was guarded optimism throughout the camp and media ahead of the tournament. It was a manageable group if the United States played to their potential. They just needed to take care of business.

“Twenty years ago it was, we don’t belong on the field,” U.S. Soccer Federation president Sunil Gulati said ahead of the tournament. “Now it’s, we don’t belong in the winner’s circle yet. No one is taking us for granted, I guarantee you that.”

The United States is 2-0 in wars against England, but their record in international football competitions is much less successful. To that point, the United States had a record of 2 wins and 7 losses heading into the 2010 World Cup. The Americans likely would have preferred their toughest group match not to come in the all-important first game, but that’s the way the schedule fell.

Disaster struck almost immediately for the United States as Liverpool midfielder Steven Gerrard slotted home an Emile Heskey pass from near the penalty spot to give England the early lead after just 4 minutes. Some American fans began having flashbacks to the 2006 World Cup and their opening round spanking by the Czech Republic.

With the game plan thrown out the window with the first goal, the United States was forced to come out and attack more than they would have liked. Even so, it looked more likely England would get a second, rather than the United States equalizing.

A few minutes before halftime Rob Green committed one of the worst goalkeeping errors in World Cup history. After escaping pressure from Gerrard, Clint Dempsey fired a shot at the England goal that was more out of a lack of other options rather than a quality effort on goal. Yet the shot had enough pace on it to bounce off the hands of the kneeling Green and carry into the England net.

The match had a few more quality chances for both sides, but the game would end 1-1 with the two teams splitting the points. It was as good a result as the Americans could have hoped for given how the game started.

After earning a point in their first match against England, the United States was confident going into their match against Slavic minnows, Slovakia.

Despite the American’s expectations, it was Slovenia that got off to a flying start behind a Valter Birsa curler from about 25 yards out. Goalkeeper Tim Howard was beaten again just before halftime when Zlatan Ljubijankic slotted home a pass under the keeper’s outstretched arms.

The United States would need a miracle to get anything out of this match. They would get their moment of magic from their talisman, Landon Donovan, just after halftime. Donovan dribbled down the wing and turned down the end line only to blast a shot directly over the head of Samir Handanovic and into the top of the net. It was a spectacular strike that left the Slovenian keeper stunned.

Late in the match, the United States got their equalizer. In the 82nd minute, Michael Bradley poked home an Altidore knockdown to level the match. American hopes to advance were still alive.

The Yanks nearly won the match in stoppage time when Maurice Edu blasted home a Donovan free-kick, but the goal was called back when the referee blew for a foul. The match ended 2-2. The Americans would need a big result in their final group stage match to go through.

After 90 minutes this was exactly the situation the United States found themselves in. They had come close, Dempsey even put the ball in the back of the net before the assistant referee’s flag went up for offside. But when the fourth official’s board went up to indicate there would be four minutes of stoppage time, it looked likely the United States would be eliminated in the group stages two tournaments in a row.

That was until Tim Howard quickly threw the ball to Landon Donovan who sprinted forward, passing to Jozy Altidore, who crossed it for Clint Dempsey right in front of the Algerian net.

The Algerian goalkeeper saved the shot but the rebound fell directly into the path of Donovan who slotted home the winner. Landon Donovan had just secured a historic victory and produced a moment American soccer fans will never forget.

After Donovan’s dramatic heroics against Algeria, the United States was riding a wave of emotions into the knockout stages. They were paired against the Black Stars of Ghana. While it was not the easiest draw for the United States, they were happy to avoid any of the powerhouses from Europe or South America.

The United States found themselves behind early in the match when in the 5th minute, Kevin-Prince Boateng drove forward and drilled a shot past Tim Howard from the top of the 18-yard box. The Americans would have to play from behind yet again.

The Americans would get their chance in the 62nd minute when Clint Dempsey was wiped out in the box, earning a penalty. Landon Donovan coolly put the shot off the right goalpost and into the back of the net.

Momentum was with the Americans, but they failed to get a winner before the end of regulation. The match would go to extra time.

Just three minutes into the extra thirty, Ghana counterattacked with a quick ball over the top of the American defense to striker Asamoah Gyan. The Ghanaian striker took a touch off his chest and volleyed the ball past Howard. It was a beautiful strike, but it meant the end of the road for the United States.

There was an incredible sense of disappointment after the extra-time loss to Ghana. The United States was so close to a trip to the quarterfinals and then that trip was abruptly canceled. However, in the sober light of day, the play of the United States Men’s National Team in the 2010 World Cup was incredibly important for the growth of the game in the States.

Sure, they had passed up the dark days when most Americans didn’t realize the World Cup was even happening, but after the disappointment of 2006, there was a risk of fans turning away from the team.

Americans like to win, especially when the “Stars and Stripes” are competing. The Olympics are an incredible ratings bonanza every four years in part because the United States wins buckets of gold medals.

The chance was here to win back the attention of the casual American sports fan, and they did it in one moment. The Landon Donovan winner against Algeria.

“It’s the biggest win we’ve ever had for so many reasons,” said Sunil Gulati, president of the United States Soccer Federation. “One is obviously the fashion in which it happened. Second is the overcoming of adversity, not just today, but given what happened (against Slovenia). And three, most of the country was tuned in to the game.”

Gulati was right. American viewership was up 68% over the 2006 tournament. An average of 11.1 million people watched the United States’ matches, up from 6.6 million four years before.

That result did the cliché. It captured the imaginations of American sports and soccer fans all over the country. In the aftermath of the victory, videos popped up all over the internet of fans living through the moment. The expression of joy and relief was something unseen around American soccer before this moment.

Ask any American soccer fan where they were when the Donovan goal went in and they can tell you. Most still get goosebumps listening to the call of “GO GO USA!” by Ian Darke on the ESPN broadcast.

Success builds on success. It’s easy to see how the American’s advancing out of the knockout stages here gave the group confidence in the 2014 World Cup despite landing themselves in the tournament’s “Group of Death.”

In 2014, the United States advanced to the knockout stage, making it 3 out of the last four tournaments in which they had gone beyond the group stages. Never before had the United States had that kind of success.

Television ratings continued to rise in 2014 also. The United States group stage match against Portugal was seen by 24.7 million Americans.

That wouldn’t have been possible without the impressive run of the 2010 United States Men’s National Team. The United States at the 1994 World Cup

Imagine a team making the World Cup without a top-flight league in their country. That was the situation for the … 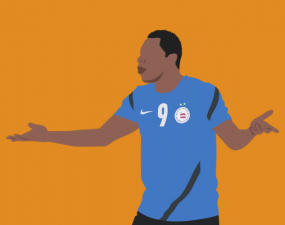