Despite a population of less than 5 million Croatia somehow have a knack of producing world-class talent like Ballon d’Or Winner Luka Modric, Ivan Rakitic, Mario Mandzukic and Ivan Perisic to name but a few. That quartet played a pivotal role in reaching the 2018 World Cup final, which they lost to France. Now the country is looking for a new crop of talented youngsters to take them forward. Below we look at the best young Croatian players in FIFA 21 career mode:

Looking for the best young Croatian players in FIFA 22? Check them out here.

It’s set to be a breakthrough year for 17-year-old midfielder Luka Sučić. Rated 62 overall with a potential of 80, the teenager offers a bit of everything in the heart of midfield with 77 short passing, 66 dribbling and 67 long shots. But his real strength lies from deadball positions. A set-piece specialist, Sučić has 72 free-kick accuracy, 70 curve and 72 shot power. Currently plying his trade in Austria with Red Bull Salzburg, the youngster has a release clause of just €2.1 million in FIFA 21 career mode.

A product of the Dinamo Zagreb academy Antonio Marin is currently on loan at AC Monza where he’ll be hoping to get valuable playing time. The 19-year-old pacy winger can play on either side as well as through the middle, but is most effective on the left where he likes to cut in on his favoured right foot.

Still only rated 67, but with a potential of 83, Marin’s biggest strength is 86 acceleration. Pair that with 80 dribbling and it’s easy to see why the youngster has defenders running scared.

In today’s day and age, it’s rare to see a full back defend as well as they attack or vice versa. But in Domagoj Bradarić Croatia look to have a left-back who’s effective at both ends of the pitch. Defensively the 20-year-old is solid with 71 standing and sliding tackles and 70 defensive awareness, whilst going forward Bradarić poses a threat from wide positions with 74 crossing and dribbling.

79 acceleration, 78 speed and 76 stamina enable the full-back to consistently get up and down the pitch. Rated 75 overall with a potential of 83 Bradarić has a FIFA 21 career mode release clause of €25.2 million.

A box-to-box midfielder Ante Palaversa is expected to be Croatia’s long term replacement for Ivan Rakitic. Currently on loan at Getafe, from Manchester City, the 20-year-old is rated 72 overall with an 84 potential.

Palaversa has all the right attributes to become a complete midfielder with 76 short passing, 74 ball control, 74 shot power and 74 defensive awareness. The only thing lacking from his game right now is finishing which is currently rated just 48 in FIFA 21.

A potential wonderkid in the making, 18-year-old Joško Gvardiol is a dominant centre back with exceptional aerial ability, pace and strength. Currently rated 70 overall, but with a potential of 86, the Dinamo Zagreb academy graduate is Croatia’s biggest prospect in FIFA 21, and with a release clause of just €10.7 million he’s an absolute bargain.

A rock at the back, Gvardiol is equipped with 82 aggression and 83 strength and has pace to burn with 82 sprint speed, which is rare for a centre back. He’s confident with the ball at his feet too with 71 short passing. Joško Gvardiol is definitely one to watch.

As the saying goes, it’s quality, not quantity and that’s definitely the case here. Croatia, once again, have nurtured a talented crop of youngsters, and whilst they’re not blessed with depth in numbers they do have a potential world class star in Joško Gvardiol. 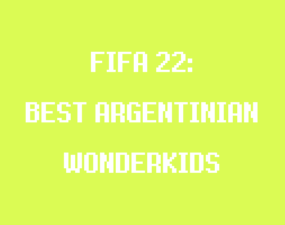 Aguero, Di Maria, Higuain and, of course, Lionel Messi. Argentina has been blessed with some serious attacking talent over the … Mexico recently qualified for their 8th consecutive World Cup and, in all honesty, it’s no surprise with the talent they …