The next crop of Croatian footballers will have a lot to live up to following the success of their golden generation. Luka Modric, Ivan Rakitic, Mario Mandzukic and Ivan Perisic all played a vital role in finishing runners up at the 2018 World Cup, but are now nearing the end of their illustrious careers.Time then for the Blazers to look to the future. Below we discuss the top five Croatian players in FIFA 22.

Dubbed the ‘Split Mbappe’ 19-year-old Marin Ljubičić is expected to become Mario Mandzukic’s long term replacement up top. Currently rated 67 overall with a potential of 84, the Hadjuk Split academy graduate has a natural eye for goal with 71 finishing and 65 heading accuracy. Standing 6ft tall, he has the ability to run in behind with 79 sprint speed and 73 acceleration, whilst also having the strength (66) and control (64) to play with his back to goal.

After making his debut for Hadjuk Split last season, Stipe Biuk has fast become a first team regular and there are high hopes for the 18-year-old left winger. Rated 69 overall with a potential of 84, Biuk has been likened to compatriot Ivan Perisic and it’s easy to see why. He’s pacy with 83 sprint speed and 74 acceleration. Tricky and comfortable on the ball with 70 dribbling and ball control. And, unlike most modern wingers, actually plays on the same wing as his stronger foot. His end product does need improving, though, with crossing and finishing attributes less than 70. But make no mistake, this kid is set to be a star.

It can’t be easy for Croatia’s next crop of centre midfielders. Constantly compared to Luka Modric and Ivan Rakitic, they’ve got a lot to live up to. But in Marko Bulat, the Blazers look to have another serious talent on their hands. Like Modric, Dinamo Zagreb’s 19-year-old has a wand of a right foot and is best deployed as a deep lying playmaker where he can utilise his 75 long and short passing attributes. Capable of playing the holding role or further forward, Bulat is a well rounded midfielder with 71 vision, 75 stamina and 75 shot power. Rated 69 overall, with a potential of 84 in FIFA 22, Bulat has a release clause of just €9.3M, which could prove to be a serious bargain.

Standing 6ft 2inches tall, Mario Vušković is a no nonsense, combative centre back who’d probably two-foot his Nan if he had to. Unlike most modern defenders the 19-year-old, who’s rated 72 overall with a potential of 85, actually enjoys defending. He’s good at it too with 76 interceptions, 74 standing tackle and 72 sliding tackle. Currently on loan at Hamburg from Hadjuk Split, Vušković is described by many as being technically gifted, but his FIFA 22 attributes don’t back that up with passing and dribbling both in the red.

For the second year running Joško Gvardiol is Croatia’s hottest prospect on the new FIFA. Rated 75 overall with a potential of 87 the ball playing centre back, who can also slot in at left back, is not only tipped to become one of Croatia’s top talents, but one of the best in the world. He can pass, dribble, tackle, head, everything. He’s a Rolls-Royce. Easy on the eye with 74 short passing and 73 dribbling, but physical too with 87 sprint speed, 84 strength and 83 jumping. Simply put, this kid is talented and definitely one to look out for in the future.

Croatia fans would be forgiven for worrying about the future of their national team with a number of big stars set to retire in the not so distant future. But there’s reason for optimism. Because once again they look to have developed another crop of talented youngsters, all with serious potential. In Joško Gvardiol, Mario Vušković, Marko Bulat and Marin Ljubičić they should have a solid core to build a team around, while Stipe Biuk can provide moments of magic from the wing. 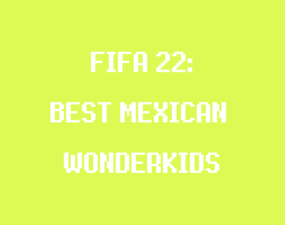