After a record breaking run of 37 games unbeaten and a second European Championship success, Italy’s new crop of talent has a lot to live up to. Veterans like Leonardo Bonucci and Giorgio Chiellini will soon be calling it a day leaving the next generation to take on the mantle. Below we take a look at the best young Italian players in FIFA 22.

Currently on loan from Roma at Hellas Verona, 18-year-old Matteo Cancellieri is tipped to have a bright future. Still only rated 68 but with a potential of 81 this pacy, agile winger has already represented Italy at youth level. Slightly built and 5 ft 9 inches in height, Cancellieri is your classic modern day wide man. Comfortable on the ball with 72 ball control and 73 dribbling, pacy with 79 sprint speed and acceleration and, as is the way nowadays, he’s left footed playing predominantly on the right wing as an inside forward. Despite all the positives, Cancellieri’s end product needs improving, which should come with more game time.

Roma’s 19-year-old Riccardo Calafiori has represented Italy at youth level since the age of 15, most recently for the Under21s and, providing he continues developing, should go on to feature for the senior team in the not so distant future. Capable of playing a number of positions including left back and left midfield Calafiori is a well rounded player with 72 crossing, 73 ball control and 69 standing tackling. Rated 68 overall with a potential of 81 the teenager provides excellent value for money in FIFA 22 with a €6.3 million release clause.

One of three defensive midfielders to make the list, Mattia Viviani is best deployed as a deep-lying playmaker where he can showcase his passing ability. The 20-year-old, still only rated 68 overall with a potential of 81, has the attributes to carve open the toughest of defences with 75 short passing and 72 vision. Physically, though, he still has room to improve with 61 stamina and 62 strength, but with regular game time, which he’s likely to get at new club Chievo, there’s no reason why he won’t.

Italy’s current first choice centre back pairing of Leonardo Bonucci and Giorgio Chiellini has a combined age of 71, so it’s only a matter of time before the Azzurri look for their long term replacements. Lorenzi Pirola could well be one of those to step up to the plate. Currently on loan at AC Monza from Inter Milan, the 19-year-old is nowhere near the finished article, but has all the right attributes to become a dominant centre half. Currently rated 64 overall with a potential of 82, Pirola has already shown he’s solid defensively with 72 standing tackle and 62 heading accuracy. Bang on 6ft he’s by no means the tallest of defenders, but what he lacks in height he makes up for with 69 jumping and, more impressively, 76 strength. The kid’s a tank.

Teenage sensation Eddie Salcedo averaged a goal every three games for Italy’s Under19s, but the Inter Milan striker has failed to hit the same heights at club level. Currently on loan at Spezia, following a season at Hellas Verona, the 20-year-old has found the net only three times in his last 40 appearances. Despite his recent poor run of form Salcedo is rated 70 overall with a potential of 82 and is a well rounded striker with 79 ball control, 78 dribbling, 80 jumping and 79 acceleration. End product needs improving with 63 finishing, 67 heading accuracy and 61 crossing, but this kid definitely has the right attributes to become a top quality striker.

Aged 21, Emanuel Vignato is already closing in on 100 senior club appearances. Rated 71 overall with a potential of 82, Vignato made his Serie A debut during the 2016/17 season for Chievo, where he’d go on to play almost 50 games. Now a first team regular at Bologna, the creative midfielder’s stock is on the rise following an impressive 2020/21 campaign, which resulted in 7 caps for Italy’s Under 21s. An aspiring number 10, with a quick turn of pace (77 acceleration), Vignato has been likened to a certain Francesco Totti. A little over the top? Perhaps, but there are some similarities with 77 dribbling, 76 ball control and 74 short passing. Whether he reaches the same level as Totti, it’s highly unlikely, but he’s definitely one to keep an eye on.

Another promising Italian youngster to look out for in FIFA 22 is Nicolò Fagioli. The 20-year-old is highly rated amongst Juventus fans, and it’s easy to see why. Rated 68 overall with a potential of 83 Fagioli is an astute playmaker with 73 short and long passing. He’s comfortable on the ball, especially in tight situations, with 75 ball control and 73 dribbling. The latter can be utilised at both ends of the pitch, bursting into the box or picking up the pieces deep in his own half. Fagioli was handed his Juve debut last season under Andrea Pirlo, and the Italy legend went as far to draw comparisons between himself and Juve’s new wonderkid. High praise indeed.

A box-to-box, battling midfielder, Samuele Ricci has already made over 60 senior appearances for boyhood club Empoli. Possessing 72 ball control and 73 short passing the 19-year-old has a knack for keeping the ball, even when space is limited. Out of possession he provides bags of energy with 74 stamina. Rated 67 overall with a potential of 84 Ricci has all the right attributes to become a top midfielder and with a release clause of just €6.3 million he’d make a fantastic investment in FIFA 22 career mode.

Italy’s brightest attacking talent in FIFA 22 Sebastiano Esposito was nominated for the Golden Boy award in 2020. Still only 18, the Inter academy graduate is currently on loan at Basel where he’s scored four goals in six appearances (correct at the time of writing). Standing 6ft 1inch tall he’s deceptively quick with 71 sprint speed and, for a relatively big man, is good with his feet. Make no mistake, Esposito is nowhere near the finished article with a current rating of just 68, but the teenager is expected to develop into an elite forward with a potential rating of 85. If that’s the case, then he’ll be worth every penny of the €3.1 million valuation. Bargain.

Fabio Capello, Carlo Ancelotti, Genarro Gattuso and Andrea Pirlo to name but a few. Italy have produced some fine midfielders over the years and they’ll be hoping Nicolo Rovella is one to add to the list. Still only 19 the Genoa CDM, on loan from Juventus, is currently rated 70 overall with a potential of 87, making him Italy’s hottest prospect in FIFA 22. With 75 short passing, 70 long passing and 72 vision the teenager is well suited to playing the ‘quarterback’ type role. Dropping deep. Getting on the ball. And dictating play. Like Pirlo once did and Jorginho does now. Rovella has bags of energy too. 81 stamina allows him to play a more box-to-box role when, and if, required.

Let’s be honest, this crop of Italian youngsters is nowhere near as talented as previous generations, particularly the ‘90s and noughties which included your Nestas, Maldinis, Tottis, Pirlos etc. But as the Azzurri have shown recently you don’t need world class players to be successful. No. Teamwork, togetherness and application can go a long way to earning success. And if this group of players buy into that philosophy then there’s no reason why they too can’t go on to achieve big things. 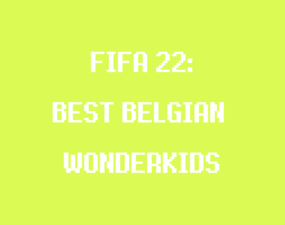 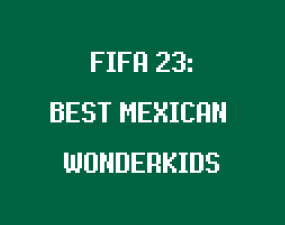