Scotland’s appearance at Euro 2020 was their first at a major international tournament since 1998, and although they picked up just a solitary point in the three group games they played, they’ll be confident of reaching more tournaments in years to come. Especially with the current group of players at their disposal. Below we take a look at the 5 best Scotland internationals in FIFA 22.

Since joining Southampton from Celtic in 2018 midfielder Stuart Armstrong has established himself as a solid Premier League player. Capable of playing both out wide and through the middle Armstrong is effective in the final third where he can utilise his 76 finishing, 77 short passing and 72 crossing. Like most Premier League players, Armstrong is comfortable on the ball with 77 ball control and 76 dribbling, he has 3 star skill moves too in FIFA 22. Rated 77 overall, and now aged 29, the Scotland international has probably hit his peak and is unlikely to improve in the future.

Criminally underrated, John McGinn is one of the first names on the Aston Villa team sheet. A grafter with bags of ability the 26-year-old is a fan favourite at Villa Park and is known for his versatility within the heart of midfield. Often deployed as a defensive midfielder where he can utilise 90 stamina and 80 short passing McGinn also has the technical ability to play further forward as an attacking midfielder.

With 80 dribbling and 78 ball control McGinn is an accomplished ball carrier. But it’s when he’s given time and space where he’s most dangerous. With 86 long passing attributes in FIFA 22, McGinn’s range of passing is second to none.

McGinn brings bags of energy and moments of brilliance to both Villa and Scotland so it’s no surprise to see him with an overall rating of 79. Given his age, he’s likely to improve in the coming years, and currently has a potential of 80 in FIFA 22.

If there’s one thing Scotland aren’t short on it’s world class left backs, and Kieran Tierney can count himself incredibly unlucky to have burst onto the scene a few years after Andy Robertson (more about him later). As a result Tierney is often played out of position for Scotland, as a left sided centre back playing in a back 3. For Arsenal, though, in his more familiar position of left back, the 24-year-old, who’s currently rated 81 but with a potential of 87, is able to utilise his 83 crossing and 79 dribbling in the final third. He can beat a man too with 79 dribbling. Defensively the Arsenal full-back enjoys getting stuck in and has 78 defensive awareness, 78 standing tackle and 77 sliding tackle in FIFA 22.

Manchester United’s Scott McTominay may not be the most technically gifted, but what he lacks in dribbling and positioning he certainly makes up for in graft and effort. Best deployed as a defensive midfielder, McTominay provides an effective shield in front of the back four with 83 interceptions and 80 standing tackles. Once possession is regained the 24-year-old, who’s rated 81 overall with a potential of 84, has the composure and ability to pick a pass. 80 long passing and 79 short passing illustrate the midfielder’s passing range, which he probably doesn’t get enough credit for.

One of, if not, the best left backs in world football right now. Andy Robertson has been a revelation under Jurgen Klopp, and plays a pivotal role in the German’s gegenpress style of play where he’s encouraged to press high up the pitch and bomb forward at every opportuntity. Aged 27, many believe Robertson has already reached his full potential of 87, but the Premier League and Champions League winner shows no sign of letting up. He’s relentless and that’s echoed with 95 stamina in FIFA 22.

Effective both defensively and offensively, Scotland’s captain is solid in the tackle with 84 standing tackle and 81 sliding tackle. He’s deceptively nippy too, 85 sprint speed and 83 acceleration mean he’s capable of matching the quickest players in the world stride for stride. In the final third Robertson often bags himself an assist or two thanks to 88 crossing and 82 short passing.

With Andy Robertson and Kieran Tierney Scotland are sorted for left backs for years to come, and it’s the same in midfield with John McGinn and Scott McTominay. But up front they look light, which has been a constant problem for the Tartan Army. Denmark backed up their impressive display at Euro 2020, where they lost to England in the semi-finals, with an almost … 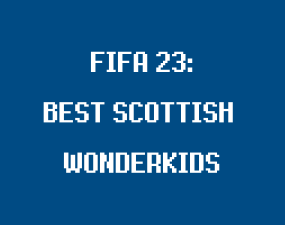