The Premier League Golden Glove is a relatively new award, having been handed out for the first time in 2005. In the 15 years since, its status has grown exponentially.

It’s a straightforward enough concept. The prize is given at the end of the season to the goalkeeper who has kept the most clean sheets across 38 Premier League matches. Its critics have suggested that this might not necessarily be the fairest way to decide who has been the best keeper, as the award has been awarded exclusively to goalkeepers representing top-four clubs.

But a glance at some of the names to have scooped the prize reveals an A-list of some of the best shot-stoppers of the past two decades. Here, we’ll go through the winners of the golden glove year on year.

The first season the Golden Glove was awarded, it was Chelsea’s Petr Cech who scooped the prize. It was a sight which we would become familiar with over the years. He kept an astonishing 24 clean sheets as Chelsea lost just once. Between December 13 and March 5, he didn’t concede a single goal. Across the whole season, Cech conceded only 15. It was a defensive and goalkeeping season which might never be repeated.

The Benitez-Mourinho era was one of the most defensive in top-flight history – and this state of affairs is reflected in the Golden Glove charts. Liverpool finished in 3rd place in 05-06, eight points behind Chelsea, but it was Reina and Liverpool who kept the most clean sheets. Reina was a great goalkeeper, but he had his Spanish manager’s tactics to thank as much as his own ability.

Liverpool finished 3rd once again in 06-07. This time, however, they were much further adrift – 21 points behind champions Manchester United, to be precise. But it was Reina who once again who kept the most clean sheets in the Premier League season. Liverpool reached the Champions League final that season too, though Reina was unable to stop AC Milan avenging their defeat in the same competition three campaigns earlier.

Another year, another Pepe Reina Golden Glove award. He kept fewer clean sheets that he had in either of the previous two seasons in 07-08, and there were meaner defences in the Premier League in terms of total number of goals conceded. But it was still the Spaniard who managed to shut out the opposition on the most occasions. He stayed with Liverpool until 2014, but this would be his last Golden Glove award.

Given that the Dutchman played for Manchester United for six years at a time when Sir Alex Ferguson’s side had one of the greatest defences in top-flight history, it is perhaps surprising that Edwin van der Sar won just one Golden Glove award. He kept 21 clean sheets in 08-09 as United won the league ahead of arch-rivals Liverpool. Van der Sar was a wonderful shot-stopper and won four Premier League titles in his time at Old Trafford.

Four years after his first Golden Glove success, Chelsea’s Czech goalkeeper won a second. Of all the men to have won the award more than once, Petr Cech is arguably the goalkeeper with the greatest Premier League legacy. His 09-10 campaign was arguably his finest. Chelsea won the league by a single point, with Cech one of the key factors in the Blues seeing it through to the end.

A few years after he left Manchester City, Joe Hart would have a training pitch at the club’s facilities named in his honour. The reason he is so well thought of at the club began in the 2010-11 season. It was the first campaign they finished inside the top four in the Premier League era. They conceded 33 times, the joint-least in the league and that was due in large part to the heroics of the young Joe Hart.

His career nosedived in later years, but for a stretch between 2010 and 2013, Joe Hart could stake a reasonable claim to be one of the best goalkeepers in Europe. A year after they first qualified for the Champions League, City went a step further and won the Premier League for the first time. Joe Hart was a rock behind a resilient defence in Roberto Mancini’s side, conceding just 29 times and keeping 17 clean sheets in total.

Just as Reina had between 2006 and 2008, Joe Hart won his third Golden Glove in succession at the close of the 2012-13 campaign. Manchester City were unable to retain their title, finishing some way off United. They did, however, concede the least goals in the division, with Hart the main man between the sticks yet again.

Petr Cech drew level with Pepe Reina and Joe Hart in 13-14 in terms of Golden Gloves. His achievement was arguably more impressive given that just short of ten years had passed between his first and third edition of the award. It was no surprise that he did it under the renewed management of ultra-cautious gaffer Jose Mourinho. But he would have to share the prize with Arsenal’s Wojciech Szczesny who also kept 16 clean sheets. It is the only time in the award’s 15-year history that two keepers made the same number of shutouts.

Manchester City could only finish 2nd in 14-15 as Mourinho’s Chelsea won the title with 87 points. But given his steadfast defence-first principles, the Portuguese manager will have been disappointed that it wasn’t his goalkeeper that claimed the Golden Glove award. That honour went, for a fourth time, to City’s Joe Hart. By this time, Hart had established himself as England’s first-choice goalkeeper. Though impressive, his total of 14 clean sheets in the 14-15 campaign is the lowest of any Golden Glove-winning goalkeeper.

Joe Hart’s fourth edition of the award had moved him out in front of Cech and Reina in terms of the number of Golden Gloves won. But he could only enjoy the title for a single season as, in 2015-16, Petr Cech kept 16 clean sheets and moved level with the Englishman. This time, however, Cech was playing for Arsenal, not Chelsea. That over a decade passed between Cech’s first Golden Gloves and his last is testament to his longevity at the elite level.

It was fitting that the man who replaced Petr Cech at Chelsea, Thibaut Courtois, won the award in 16-17. He had been waiting a long time usurp Cech, establishing his credentials with several loan spells with Atletico Madrid. Chelsea won the league in Thibaut’s first full season as No. 1 and did so under the stewardship of Antonio Conte. The Italian made Chelsea a defensively solid unit once more and Courtois kept 16 clean sheets.

In terms of raw ability, David De Gea is perhaps the best goalkeeper in the Premier League. Had he played for Manchester United a decade earlier, he would surely have won more than one Golden Glove award. The Red Devils finished 2nd that season, but well behind Manchester City who reached a historic 100 points total. But despite City’s excellence, they only conceded one less goal than United and it was De Gea, not Allison who won the Golden Glove.

Manchester City won the league yet again in 18-19, but this time were run much closer by a resurgent Liverpool side under the tutelage of Jurgen Klopp. Liverpool conceded just 22 goals that season, the fewest in the league. Two new signings were instrumental in that regard: Virgil Van Dijk and Allison. The latter, a Brazilian shot-stopper signed from Roma, won the Golden Glove in his first season in English football.

Despite being part of one of the most impressive sides in the history of the Premier League, it wasn’t until three years after his arrival in England that Ederson won the Golden Glove award for the first time. Like Allison before him, Ederson was a superb goalkeeper, not just with his hands but his feet too. He managed 16 clean sheets in the 19-20 season, but Manchester City were unable to retain the title as Liverpool returned to the top of English football for the first time in three decades. 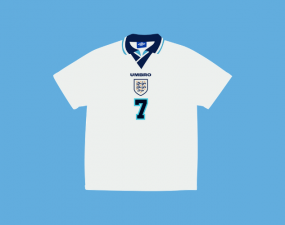 Euro 96 enjoys a reputation in England which is perhaps disproportionate to what the country achieved in sporting terms. Terry … It’s no exaggeration to say that English football has seen few finishers as natural as Jordan Rhodes. It is also …