Goalkeepers have one of the most difficult jobs in sports. They play such a small part in the game and often go long stretches of the match without touching the ball or even being a part of the action. Yet, they must be remain locked in and focused for the moment they are called upon. If not, they could be at fault and allow an opponent to score.

Some goalkeepers, however, don’t settle for cameos here and there. They want to a bigger part of the action. We aren’t talking about Manuel Neuer setting up shop in front of his 18-yard box, we’re talking about goalscoring goalkeepers.

Read through this list of the top ten goalscoring goalkeepers and learn some incredible stories. From penalty experts to free-kick takers that would make Roberto Carlos’ left foot look weak, this group of men is incredible.

Despite being one of the highest goalscoring goalkeepers of all time and having a career that lasted for nearly 25 years, Fernando Patterson earned just one cap for the Costa Rican national team. In fact, Patterson spent so much of his career in Guatemala, instead of his homeland, so much so that he’s since become a naturalized citizen.

The majority of his career and goals came at Guatemalan club Xelaju. He left many times, but he just couldn’t stay away from the club, making 5 different stops with Xela over the years. Patterson retired in 2013 at the age of 43.

Dragan Pantelic is a well-known name in the annals of Yugoslavia’s footballing history. He was known for his goalscoring record, with most of his goals coming from the penalty spot.

Of his 26 goals, one stands out from the rest as particularly impressive. In a league match for Radnicki Nis, Pantelic scored the match-winner against Velez Mostar from his own penalty area. That’s a heck of a shot.

Two of Pantelic’s 26 goals came at the international level. The man only made 19 appearances for Yugoslavia but found the net in two of them. Not bad.

Misael Alfaro is a legend of the El Salvadorean football scene. It’s not every day that a player plays for over 20 years, and it’s not every day that a goalkeeper scores 31 goals in their career. Over his 22-year career, Alfaro took home numerous Primera Division Clausura and Apertura titles. But he’s best known for his goalscoring record.

Alfaro scored 31 goals, with 11 of them coming from penalty kicks. What’s remarkable is that he wasn’t just a penalty machine. He was scoring goals from free-kicks and open play as well. Unfortunately for the ageless wonder Alfaro, a neck injury ended his career prematurely at age 39. If not for that, he could have extended his goal record.

Hans-Jorg Butt is the German king of penalty-taking goalkeepers. He once scored 7 and 9 in consecutive seasons while at Hamburg. Those are good numbers for any non-forward player, let alone a goalkeeper.

However, in 2004 Butt’s excitement got the better of him. He scored a penalty at Schalke and celebrated with his teammates. However, Butt’s celebrations were a bit too enthusiastic and he failed to make it back to his goal before Schalke player Mike Hanke took the kickoff and shot the ball from the halfway line over Butt’s head and into the goal.

One remarkable fact about Butt’s goalscoring record is that he scored three times from the penalty spot against Juventus. Interestingly enough, he scored goals at all of the clubs he played for until his final two clubs – Benfica, and Bayern Munich, although he did manage to score for Munich’s B squad. Butt also failed to score in any of the 4 occasions he played for Germany.

Marcio Luiz Silva Lopes Santos Souza, or Marcio, is a now-retired goalkeeper who played nearly all of his club football in the state of Goias, in Brazil. He played first for Atletico Goianiense, where he won two Goias State League titles and a Serie C title. He played 521 times in 9 years for the “Dragons” before moving to in-state rivals Goias, where he played just 13 times.

Marcio was a successful goalscorer for Atletico, finding the back of the net 38 times. Marcio was a penalty merchant, scoring all of his goals from the spot. It’s a remarkable accomplishment for one of the least known players on this list.

Dimitar Ivankov holds the distinction of being the highest-scoring European goalkeeper in history. Ivankov is a 3-time Bulgarian league winner and 5-time Bulgarian Cup winner. While in Bulgaria he scored 25 of his goals, mostly penalties.

Ivankov scored 12 goals while at stops in Turkey with Kayserispor and Bursaspor, and at least 3 of them were significant. Ivankov had an integral role in Kayseri winning the Turkish Cup in 2008 when he saved three penalties and scored 2. The following season, while with Bursaspor, he scored a 95th-minute winner over title rivals Fenerbahce. Bursa would go on to win the Super Lig that season.

As much goalscoring success as Ivankov had in his club career, he never scored in any of his 64 appearances for Bulgaria.

Rene Higuita is known around the world for one spectacular moment: the scorpion save against England in 1995. That singular moment is just one example of his colorful personality that earned him the nickname “El Loco.” His sweeper-keeper style was innovative and led to goalkeepers taking on more of a role in the game.

It’s little surprise then that Higuita would often dribble up the pitch attempting to score. This didn’t work to tragic effect in the 1990 World Cup when he tried to dribble past Cameroon’s Roger Milla only to have the Cameroonian steal the ball and score, sending Colombia out of the tournament. Higuita had better luck with free kicks and penalties. He scored 41 times for club and 3 times for country.

Johnny Vegas, as he is known, was a journeyman goalkeeper, as evidenced by the long list of clubs he played for over 20 years. You can be forgiven if you aren’t familiar with the clubs of the Peruvian footballing pyramid. Just know that of the 45 goals Vegas scored, 40 of them were for 1st division clubs.

Like many of the goalscorers on this list, he was a highly successful penalty taker, yet Vegas is remarkable for scoring 9 goals in the run of play. That’s an incredible number of goals for a goalkeeper while the match was going on around him. Think of how his manager must have felt. Vegas featured 3 times for the Peruvian national team.

Players don’t often get the global recognition they deserve if they are playing in South America instead of Europe. It’s one of the reasons that so many leave their homelands for Europe. However, Jose Luis Chilavert didn’t need Europe to be recognized as the best in the world.

While at Velez Sarsfield in Argentina, the Paraguayan won the IFFHS World’s Best Goalkeeper Award three times. What’s even better, if you’re a Velez fan, is that Chilavert was often helping himself out. Of his 46 club goals, 36 of them came during his time at the club.

While some free-kick takers go for touch and placement, Chilavert, chose power every time. He was known for long run-ups and incredibly powerful shots that would make you pity the men forced to stand in the wall and defend it.

One memorable goal for Velez happened in a 1996 Clausura match against River Plate. Chilavert blasted a free-kick from well inside his own half over the outstretched arms of the River goalkeeper.

Chilavert is one of only two goalkeepers to score a hattrick in a match and has scored the most international goals for a goalkeeper with 8.

Rogerio Ceni is the legend of modern Brazilian “futebol” that you may never have heard of. The simplest reason for that is because he never left his homeland, or his first club, Sao Paulo. Ceni played at the club for 25 years, from 1990-2015. He appeared an incredible 1237 times for the club and won three Brazilian league titles and two Copa Libertadores. He did appear for his national side 18 times between 1997-2006, winning the 2002 World Cup and 1997 Confederations Cup.

What set Ceni apart, aside from his longevity, was his goalscoring ability. He is the all-time record goalscoring goalkeeper, with all but 1 of his 131 goals coming from free kicks or penalties. Just one lone goal came from open play. Those numbers are astounding. Ceni scored 70 penalties and 62 free kicks.

To put that into perspective, Ceni’s countryman and famed free-kick maestro, Ronaldinho, scored 66. Diego Maradona scored 62, tying him with Ceni. Lionel Messi has just 46 free-kick goals to his name. Simply put, Rogerio Ceni’s goalscoring abilities are legendary and will likely never be topped by another goalkeeper.

Best Players Never to Appear at the World Cup

With hundreds of millions of TV viewers in every corner of the globe, an appearance at the FIFA World Cup … 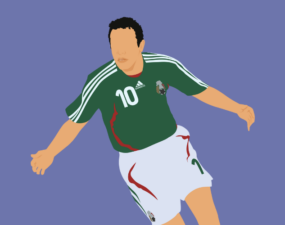 Scoring at a World Cup is no easy feat, especially when you are in your twilight years as a footballer. …