When people look back on the early days of Major League Soccer, often the memories most commonly recalled are the penalty shootouts. The way MLS chose to execute shootouts in the league’s infancy is a truly American touch on the global game.

The traditional penalty shootout involves alternating penalty kicks from each team from the spot 11 metres away from the goalkeeper. The shooter takes a short run-up and shoots. The goalie, who must begin standing on the goal line, must try to save the shot from essentially a standing position.

The MLS way was not traditional. In fact, it more closely resembles a penalty shootout in ice hockey.

In this situation, the penalty taker started with the ball 32 metres away from the goalkeeper. The referee would blow the whistle signaling for the attacker to charge towards the goal. From there both players had 5 seconds to work with.

Dribbling around, chipping, or shooting past the onrushing goalkeeper were the most common strategies for attacking players. And unlike the traditional penalty shootouts, the goalkeeper was not rooted to their line. They were allowed to meet the attacker wherever they saw fit, as long as they began the attack on their line.

Like in a traditional penalty shootout, each team would send up 5 attackers and whoever scored the most in those attempts won the game. It was an exciting and drama-filled conclusion to a match.

Penalties awarded throughout the game for infractions inside the 18-yard box were taken the traditional way. Major League Soccer employed this saloon-style shootout only when the result of the match needed to be decided.

So how did Major League Soccer come up with such a radical alteration to the game, and why did they use it?

Truth be told it wasn’t their idea. The North American Soccer League (NASL) of the 1970s and 1980s first experimented with this variation on the shootout and Major League Soccer adapted it to suit its needs.

Back in 1996 when Major League Soccer was started, the league thought, like the NASL did, that they needed to “Americanize” soccer to make it more appealing to the casual American sports fan. And what does the American sports fan hate more than anything? A game that ends in a tie.

Look at American professional sports. Basketball has overtime to settle tied ballgames. Baseball goes to ridiculous lengths to avoid tie ballgames, including stretching out the game for an unlimited number of extra innings that can double the length of a game. Football in the NFL can have ties but only after an overtime period and only because of health considerations for the athletes.

Soccer matches, however, regularly end as draws. That just wouldn’t sit right with American fans, or so the administration of MLS thought.

Their solution was to end every tie game with a penalty shootout. But not the traditional shootout. They went with the “Wild West” shootout of the NASL.

There would be no overtime. Teams would head straight to penalty shootouts; the only exception being the MLS Cup Final, which did have two 15-minute overtime periods followed by the shootout if necessary.

MLS also made adjustments to the points system for the league table. Teams that won matches in regulation continued to earn 3 points for the victory. However, if you won the game in a shootout, you only earned 1 point. There were no points given for a loss, either in regulation or in the shootout. In the playoffs, both types of wins were regarded as equal.

Major League Soccer used this procedure from its first season in 1996 through the completion of the 1999 season. During the 1999 season, MLS began to change its mind on the system and instituted two 15-minute golden goal overtime periods which would conclude in a shootout if necessary.

In MLS’s first season, three playoff series matches were concluded by a shootout, including the Western Conference Finals between the Los Angeles Galaxy and Kansas City Wiz. A Golden Goal winner from Eddie Pope of D.C. United in 1996 robbed us of the chance for an MLS Cup Final decided by the shootout.

In total 11 MLS Playoff matches in the 4 years the shootout was employed were decided in shootouts, as well as dozens of regular-season matches.

The winds of change were in the air and in 2000, the league dropped the procedure altogether. These days Major League Soccer follows all of the rules laid out by the International Football Association Board. Matches end in draws, and if a penalty shootout is needed in the playoffs, they are taken the traditional way.

After 4 years, the league was looking beyond being just a soccer experiment. The league had staying power and wanted to someday be taken seriously. One of the first steps was to stop being the radical little brother blazing their trail.

Another reason was the risk of injury. After 4 years of solving games like this, the data was clear. The more often two players are running directly at each other like this, the more chances there are for negative results, namely red cards and injuries. Those outcomes were good for no one.

One final reason was how the shootout affected the play on the field, especially tactically. By the end of the 1999 season, the percentage of games that were ended in a shootout had risen to a whopping 30%.

If the goal of the league was to end games with a winner, the effect was teams would set up more defensively ensuring a draw in regulation and taking their chances with the shootout.

Sure, that strategy worked for Italy in the 2006 World Cup Final but who wants to watch that play out every week for an entire season?

In the end, the decision was made, and the shootouts were dead.

Incredibly, there has been recent interest in bringing the MLS shootout style back to soccer. Dutch legend, and current FIFA Technical Director, Marco Van Basten has indicated that FIFA is considering using the strategy to break ties in the knockout stages of upcoming World Cups.

It would be hard to imagine the sports old guard of purists supporting such a revolutionary idea. It sure would liven up some matches though.

Until a day when the Wild West shootout is reborn, we’ll have to settle for highlights on YouTube. Jurgen Klinsmann with the USMNT

The Pursuit In many ways, Jurgen Klinsmann and the United States Men’s National Team were destined to find each other. … 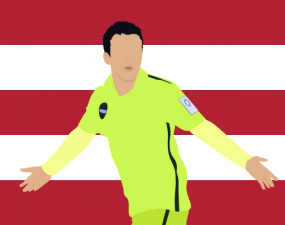 The Players That Got Away: Internationals Who Could Have Played for the USA But Didn’t