From the Scottish Borders to the Shetland Isles, the West Highlands to the North East Lowlands, football is loved throughout Scotland. And whilst it’s a nation not typically known for producing world class players, there is a new generation of talent bubbling under the surface. Below, we take a look at the best young Scottish players in FIFA 23.

18-year-old Calvin Ramsay signed for Liverpool in the summer of 2022 after bursting on to the scene at boyhood club Aberdeen. An attack-minded right-back with 79 sprint speed and 77 acceleration, Ramsay will have to bide his time at Anfield as he plays second fiddle to Trent Alexander-Arnold, but there’s no better place, or manager, in football to learn your trade.

Still only rated 64, Ramsay has a potential rating of 81 in FIFA 23, and like all solid, modern full-backs, the teenager has a good engine on him with 71 stamina. If Ramsay is to reach the levels expected then his defensive game will need to improve considerably with standing tackles, defensive awareness and sliding tackles all below 60.

You don’t see or hear of many Scottish footballers moving abroad and making a name for themselves. But Josh Doig has done exactly that. In the summer of 2022, despite interest from Celtic, the young full-back swapped Hibernian for Hellas Verona in Italy’s top flight. Like Calvin Ramsay, the Hibs academy graduate is another attack minded full-back, who can also play further forward as a winger.

With 84 stamina, 80 sprint speed and 75 acceleration Doig has the physical attributes required to get up and down the pitch with no let up. Similar to compatriot Andy Robertson, his work rate and intensity is second to none. Rated 69 overall with a potential of 81, it’s easy to see why there’s plenty of excitement and expectation on the youngster.

The third of four full backs to feature in Scotland’s best young footballers in FIFA 23, Aaron Hickey started his career at Hearts before moving to Bologna. After two years in Italy the 20-year-old was on the move again, signing for Brentford in the summer of 2022. Since arriving, Hickey has made 9 appearances for the Bees, taking to the Premier League like a duck to water.

His style of play is a perfect fit for Thomas Frank’s side with 81 stamina, 79 acceleration and 75 sprint speed. On the ball he’s incredibly confident and efficient with 75 ball control, 74 dribbling and 73 passing. Rated 75 overall, with a potential of 82, Hickey is effective defensively too with 74 standing tackles and 73 sliding tackles.

You’d be forgiven for thinking this was a list of Scotland’s best Young full-backs. But it’s not, honest. It just so happens that all but one of the Scots’ top five youngsters on FIFA 23 play either left back or right back with the pick of those being Everton’s Nathan Patterson.

A first team regular for the Toffees, the 20-year-old has an overall rating of 69 with 82 potential and has a similar style of play to both Aaron Hickey and Calvin Ramsay. 79 sprint speed, 75 acceleration and 75 stamina allow the Rangers academy graduate to press high up the pitch with intensity.

Scotland’s best young player in FIFA 23 is 19-year-old Elliott Anderson. A versatile midfielder capable of playing centrally or out wide, but most effective as a number 10, Anderson is yet to feature for the senior national team. That should change soon, though, after breaking into the Newcastle first team and impressing.

Nicknamed the ballerina by many because of his elegance and twinkle toes, Anderson has 73 dribbling and 72 ball control. The teenager is most dangerous with the ball at his feet and with 85 balance, 79 acceleration and 78 agility he has the attributes required to beat a man, or two. Rated 67 overall, there’s still plenty of room for improvement, but with a potential of 83 there’s a lot of expectation, anticipation and excitement surrounding the Newcastle youngster. 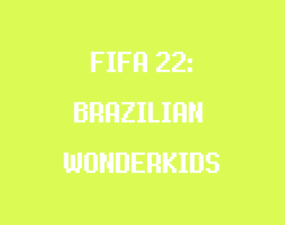