Denmark backed up their impressive display at Euro 2020, where they lost to England in the semi-finals, with an almost perfect World Cup qualifying campaign winning 9 of their 10 Group F games, with much of that success owed to their latest crop of young rising stars. Below we take a look at the 5 best Danish wonderkids in FIFA 22.

20-year-old Gustav Tang Isaksen is your classic modern day winger. He’s small in stature, has a low centre of gravity and typically plays on what traditionalists would call the wrong side. Predominantly left footed, the FC Midtjylland winger plays off the right flank where he enjoys running at defenders with 89 sprint speed and 73 dribbling. With a release clause of just €4.4million in FIFA 22 you’ll be bagging yourself a bright prospect with a potential rating of 80. That’s a bargain.

Another winger at Denmark’s disposal is 19-year-old Mohamed Daramy. Lightning quick with 87 sprint speed, 86 acceleration and four star skill moves the Ajax youngster thrives in one-v-one situations and has the beating of most defenders when it comes to a foot race. Despite only being 5ft 10” tall Daramy is deceptively good in the air with 76 jumping, an attribute he can utilise when played through the middle as an out and out striker. His end product does need considerable improvement though, particularly finishing, if he’s to go on and reach his potential rating of 82 in FIFA 22.

Capable of playing both CAM and CM 18-year-old Maurits Kjaergaar is best suited to playing the advanced playmaker role where he can get on the ball in between the lines and thread a pass. Still only rated 64 overall, but with a potential of 82, the Red Bull Salzburg teenager is definitely one for the future. 69 ball control, 67 short passing and 64 dribbling should provide a solid base to build on. And, despite his size, the boy can shift with 74 sprint speed and 74 agility. Having represented Denmark at youth level since the age of 15 there’s no doubt Kjaergaard will one day go on to represent the senior side. With a release clause of just €3.2million, this kid provides serious value for money.

Denmark aren’t known for producing elite strikers, but they may finally have one on their hands in Wahidullah Faghir. Still only 17-years-old the Stuttgart forward has a potential rating of 84 in FIFA 22 and is already proving to be a handful for defenders with 79 jumping and 79 strength. Technically there’s plenty of room for improvement with finishing, ball control and dribbling attributes all in the mid-60s, but given time there’s no doubt he will develop into a serious player.

Having scored two goals at Euro 2020, including the opener against England, Mikkel Krogh Damsgaard announced himself as Denmark’s next big thing after starting the tournament as a relatively unknown entity. Still only 21 Damsgaard is currently plying his trade in Italy with Sampdoria, where he’s already closing in on 50 league appearances.

Typically deployed on the left wing, Damsgaard is ridiculously quick with 90 acceleration and 82 sprint speed. In one-v-one situations he’s able to utilise his 83 dribbling, 80 ball control and 4 star skill moves and when space is at a minimum he has the balance and agility to ride tackles and the strength to hold off defenders.

Predominantly right footed the Danish youngster has a tendency to cut inside, as is the norm these days, but with a 3 star weak foot rating he’s more than capable of getting to the byline and sticking it in the mixer with his left peg. He’s deadly from set pieces too, as Jordan Pickford found out, with 82 freekick accuracy on FIFA 22. With a potential rating of 87 there’s no doubt this kid is destined for the big time.

Danish football is once again experiencing a sensational rise, and it shows no sign of letting up with their current crop of youngsters bursting onto the scene. Gustav Tang Isaksen, Mohamed Daramy, Maurits Kjaergaard and Wahidullah Faghir all lot set to develop into top european players, while Mikkel Krogh Damsgaard is almost certain to become the country’s new posterboy for the game.

Mexico recently qualified for their 8th consecutive World Cup and, in all honesty, it’s no surprise with the talent they …

With modern football tactics hugely reliant on wing play, most teams across Europe invest heavily in quality wingers. And if … 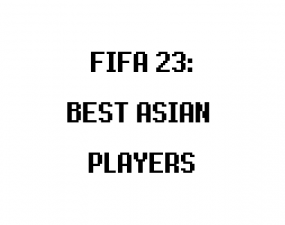 A continent not typically known for its footballing prowess, Asia is fast changing the preconceptions with more and more players …