A continent not typically known for its footballing prowess, Asia is fast changing the preconceptions with more and more players moving to Europe and making a name for themselves at some of the biggest clubs in world football. Below we take a look at the best Asian players in FIFA 23…

Japanese right back Takehiro Tomiyasu made 21 Premier League appearances during his first season in English football and would likely have made more if it wasn’t for a number of niggling injuries. A first team regular at Arsenal, Tomiyasu is comfortable at both ends of the pitch.

The 23-year-old is technically sound on the ball with 75 ball control and 75 short passing, which allows him to contribute in the final third. More importantly, though, he’s solid defensively. In FIFA 23 the former Bologna defender has 82 standing tackles, 81 defensive awareness and 79 sliding tackles. Rated 79 overall with a potential of 85 big things are expected of the Gunners fullback in the coming years.

A traditional forward who’s dominant in the air and clinical in front of goal Iran’s Sardar Azmoun has 84 heading accuracy and 82 finishing in FIFA 23. After almost ten years playing in Russia, the 27-year-old joined Bayer Leverkusen in January, and whilst he’s yet to hit the ground running, it’s surely only a matter of time before he rediscovers his goal scoring form. With over 100 career goals for club and country to his name, Azmoun is rated 80 overall with a potential of 81 and is a key figure in the Iran national team.

One of the most exciting Asian imports in European football in recent years is Japan international Daichi Kamada. An attacking midfielder with exceptional technical ability, Kamada is rated 80 overall and has a potential of 82.

With 85 dribbling and 83 ball control the 25-year-old is most effective with the ball at his feet. He makes things happen and has a knack of finding pockets of space between the lines where he’s able to utilise 84 vision and 81 short passing.

Iran is not typically renowned for being a hotbed of footballing talent, but in the previously mentioned Sardar Azmoun and Mehdi Taremi the Persian Stars have a pair of strikers who will test the sternest of defences. While Azmoun is a more prolific finisher, Taremi’s all round game is far greater.

He’s an effective ball carrier with 81 dribbling, can retain possession in tight areas with 85 ball control and has the intelligence to drift into space with 85 positioning. Rated 81 overall the Porto forward is unlikely to improve in future, but aged 29 he still has a good few years ahead of him.

South Korea’s poster boy, Heung Min Son, finished the 2021/22 campaign as the Premier League’s joint top scorer, so it’s no surprise to see him once again top the list as Asia’s best player in FIFA 23. With 23 league goals the Spurs forward enjoyed his most prolific season yet in front of goal and in doing so saw his finishing attribute increase to 91 whilst maintaining an overall rating of 89.

Now aged 29, Son is unlikely to improve in the future, but still possesses 90 sprint speed and 85 acceleration. With the ball at his feet he has the ability to beat the world’s best defenders with 87 dribbling, 84 ball control and four star skill moves.

All five players mentioned above could feature at Qatar 2022, the first World Cup to be played in Asia in 20 years. 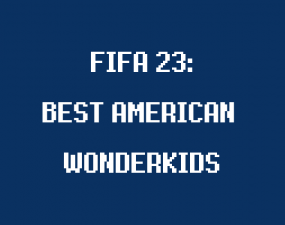 An ever-improving nation in the world of football, USA continue to produce a high number of talented footballers, many of … Looking for the best young players in PES 2021? Check out our updated list of the greatest wonderkids in eFootball …