Feet planted in a power stance, the ghost of an imperious expression written across his face, a pair of gothic wings sprouting from his back – on the cover of a GQ magazine from this time last year, Raheem Sterling looks likes the Angel Gabriel reimagined by Ozzy Osbourne. With any other footballer, such undisguised attempts to foster a sense of iconography might seem a touch laboured. With England’s newest poster boy, however, the hullaballoo is entirely justified.

A year later, Sterling has cemented his position as one of the most culturally important footballers, not just in England, but on the planet. He has featured on a dozen or so more magazine covers since then and has conducted a million more interviews with journalists from outside football media. They have realised that Sterling is much more than an athlete, he is representative of the changing face of football.

The Football Writers’ Association player of the year in 18-19, an indispensable cog in the Manchester City machine and, most significantly, an uncompromising crusader for racial justice, both on the frontlines of the terraces and in the ideological battleground of the media, Sterling’s ascent to superstardom has been stratospheric.

In the modern era, Gascoigne and Beckham are arguably the two players who’ve had as much off-the-pitch influence. Both were giants; charismatic in different ways and lions when donning the England shirt. Sterling’s presence is different, though. There is something palpably unique about his position in the hearts and minds of right-minded England fans – the feeling that he’s someone who stands for something; not just a likeable figure, but a noble one too.

When Sterling was at Liverpool, an Anfield season ticket holder and neighbour of mine told me in no uncertain terms that he was “a brilliant footballer but a scumbag”. The same neighbour now freely admits he, like millions of others, was hoodwinked by a press which espouses cloak-and-dagger racism. Therein lies Sterling’s societal impact and, indeed, his footballing significance, both to an England side which features a number of black senior players and to the younger generation of sportsmen rising through the ranks.

Of course, it goes without saying that Sterling’s influence is imponderably more far-reaching than a single dressing room, or even the dressing rooms of a dozen or so up-and-coming young English footballers. This footballing impact is an immeasurably happy by-product of his righteous struggle, however. In terms of the squad harmony of a national side which has historically been, not quite divided, but weakened by cliquishness, the Man City wide man’s powerful voice can only be a good thing in uniting them under a common goal.

It’s easy to see why Southgate sees him as a leader. In the absence of Harry Kane, these characteristics, along with the 22-carat football he’s produced for the past few seasons, prompted the England manager to hand Sterling the captain’s armband in their Nations League defeat to the Netherlands last year, a move he has repeated in many matches since.

While this is a chance he unquestionably deserves, it perhaps might be best to spare Sterling the added pressure of being Kane’s backup. The Tottenham forward’s ankle is looking increasingly fragile – he has missed dozens of matches to injury over the past two seasons – and the prospect of one of these setbacks coinciding with an international tournament is by no means inconceivable.

Whether Sterling could cope with the pressure is not in question – anyone who can withstand the relentless dogpiling he’s been subjected to surely has the mental fortitude to manage the weight of the armband. No, the question is rather whether its fair to ask him to manage that kind of sporting expectation too. We can only hope it’s an issue Southgate won’t have to address.

The front-three he has formed alongside Harry Kane and Marcus Rashford has the chance to become the stuff of legend if they can go on to win a major trophy under Gareth Southgate. It is probably fair to say that, in terms of sheer ability, it is the best in international football. There is also the added bonus that all three members of it are not just excellent footballers, but excellent people too. Harry Kane has won plaudits for his charitable actions throughout the coronavirus pandemic, going so far as to sponsor one of his old clubs, Leyton Orient, and pay to have them wear the NHS badge for the coming season. Marcus Rashford has earned rich praise from the public after forcing the government into a U-turn regarding their policy on free school meals for the poorest children.

Sterling isn’t the first England icon to appear on the front cover of a magazine; in an era of celebrity footballers, he certainly won’t be the last. The reasons for his particular cultural appeal, however, are special. There’s little praise to bestow upon Sterling that hasn’t been offered up a million times already, but for someone as important as him and for a cause as important as his, it’s worth reminding ourselves as often as we can.

In an era in which footballers seem to be using their platforms to promote socially conscious initiatives more regularly, Raheem Sterling is one of the best examples of how this can be done and done well. 2019-20 has been a largely disappointing season for Manchester City, but Sterling has continued from where he left off last season. He has surpassed his goals tally from last campaign, breaking the 30-barrier after the restart. The unique thing about him is that his performances on the pitch match up to his profile off it.

In Raheem Sterling, England have their newest icon. But his position is unique; it transcends football and reaches into what is ultimately a more important sphere. Michel Salgado at Blackburn Rovers: a “genuine psychopath” who shone in the shadows

A bewildered chicken is flung onto the pitch. 25,000 Lancastrians scream together, united by hatred. Overhead, a plane hums, the … 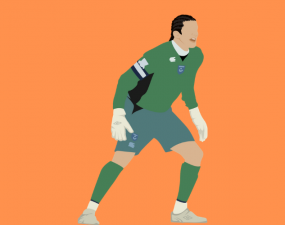 The Goalkeepers with the Most Clean Sheets in Premier League History

Goalkeepers nowadays are so much more than a preventative measure. They are just as likely to get involved in building …